Pillar and Bergstol followed their record-breaking performance in 2020 (11-under-par 57) with a team score of 9-under-par, 59. The team combined for nine birdies and zero bogies enroute to their second sub-60 round in the event to give them the edge by one stroke over second place finishers Terry Hatch, Royal Oaks G.C.; and Travis Deibert, Doylestown C.C.

The 2021 McQuiston Senior Pro-Junior Pro Championship is supported by Bala Golf Club and Vineyard Vines. The Philadelphia PGA Section and its PGA Professionals thank our partners, Bala G.C., its membership, management, and host PGA Professionals, and staff, as the event would not have been possible without their support.

About Henry J. McQuiston Jr., PGA
Henry J. McQuiston Jr. was born in Philadelphia in 1932 and grew up next to the Chester Valley Golf Club where his family lived. He and his two brothers played golf at Chester Valley and worked for  superintendent Dick Murphy. McQuiston graduated from West Chester State Teachers College in 1954 and then served two years in the United States Army. After being discharged from the Army, he went to work as a schoolteacher. In 1958 he turned professional and worked at Chester Valley while playing some tournaments on the PGA Tour during the summer months and still teaching school the rest of the year. In 1960 he took the job as the assistant at the Bala Golf Club and two years later he became the head professional. In 1968 McQuiston finished in a tie for second in the Section Championship losing in a three-way playoff and in 1971 he was second in the Philadelphia Open losing a playoff. He qualified for the 1962 PGA Championship, the 1963 U.S. Open and the 1984 PGA Senior Championship. McQuiston qualified for the PGA Tour tournament at Whitemarsh Valley Country Club ten times and made the cut three times. McQuiston was a member of eleven Challenge Cup teams that competed against the Middle Atlantic Section. He qualified for the Club Professional Championship four times and the Senior Club Pro Championship once. In 1970 McQuiston and several other Section members built the Avalon Golf Club and operated it until they sold out in 1986. He was elected as the 20th president of the Section in 1973 and 1974 after having served as the second vice president for two years. McQuiston was the head pro at Bala for thirty-seven years after which he continued on as the pro emeritus at the club. In 2004 McQuiston’s name was added to the Section’s Senior Pro-Junior Pro Championship, which had been held at the Bala Golf Club for over 20 years. He was the Section’s “Golf Professional of the Year” in 1997. In 2005 he was inducted into the Philadelphia PGA Hall of Fame.

Firestone teed off in the first group of the championship and fired a 3-under-par 67 to set an early clubhouse lead. He made five birdies and two bogies on a course that played difficult in the steady wind and featured slick greens. Perrino followed shortly with a 67 of his own, and the two waited nearly seven hours until the last groups finished before the playoff began on No. 1. Firestone made a par four against Perrino’s five.

“It’s a great feeling to get my first win of the season,” Firestone said following his playoff victory. 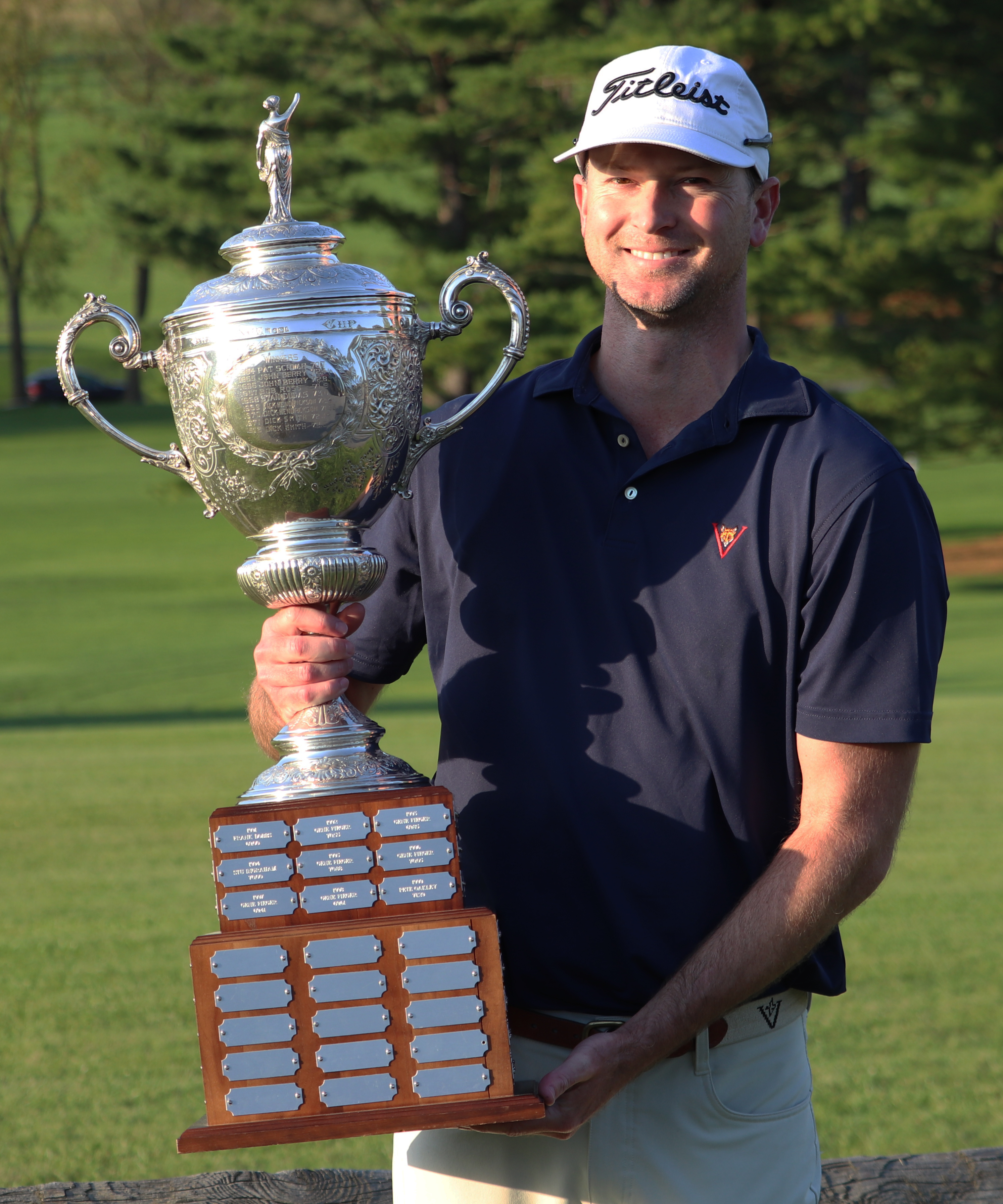 Following his round in the event, Zac Oakley of Bidermann Golf Club in Wilmington, Del. officially captured the 2021 Philadelphia PGA F. Edward Debaufre Trophy, which awards the PGA Professional with the lowest season scoring average for their consistently stellar play. Oakley’s 2021 scoring average of 68.93 over 14 rounds is the lowest scoring average since the trophy was commissioned in 1964. Additionally, Oakley’s father, Pete, previously won the award four times (1980, 1984, 1985, and 1999), making them the first father-son duo to win the DeBaufre title.

Dave McNabb of Applebrook Golf Club in Malvern, Pa., officially captured the Philadelphia PGA Senior Stroke Average title, with an average of 70.93 over 15 rounds this season. The Section congratulates both Oakley and McNabb on their consistently good play this year!

As players from the morning wave finish their rounds, it became apparent that 4-under-par would be the number to beat; Brian Kelly, Bucknell G.C.; and Mark Sheftic, Lookaway G.C.; were first in, and were quickly followed by Andrew Turner, Berkshire C.C.; Eric Kennedy, Overbrook G.C.; and Zac Oakley, Bidermann G.C.

“I hit the ball great all day,” Bensel said of his round. “I was fortunate to have a couple of tap-in birdies; my putter has been pretty cold all year, so it was nice to get a few to drop today.

Bensel went on to thank the Overbrook G.C. members for their constant support and encouragement, Lookaway G.C. for hosting, and Section partners Scott and Karen Hutchinson.

The Philadelphia Players Championship was simply an idea over casual conversations between two men who have a passion for golf and a love for Lookaway – Michael Little, PGA Head Professional at Lookaway, and Scott Hutchinson, Lookaway member, much the same way Lookaway was first envisioned. In addition to his commitment to developing this event, Hutchinson is the main sponsor of the event.

The 2021 Philadelphia Players Championship is supported by Scott and Karen Hutchinson. The event is also a Rolex Philadelphia PGA Player of the Year points event. The Philadelphia PGA Section and its PGA Professionals thank Lookaway G.C., its membership, management, and staff, as well as our partners, as the event would not have been possible without their support.

At times during the final round, McNabb seemed to be coasting; at one point he had a five stroke lead, but the field kept pushing back. Ultimately, McNabb carded rounds of 67-73—140 to win. Kelly finished with a gritty even-par 72, while Pillar turned in the low round of the day, a 4-under-par 68, to tie Kelly for second place.

“We had a field of great champions, and great players,” McNabb said holding the trophy. “It was a fun day, and I stayed in the moment, which was key.”

“My ultimate goal for [the 33rd Senior PGA Professional Championship] is to win,” continued McNabb. “I hope to have a solid week in Florida to punch my ticket to another [KitchenAid Senior PGA Championship].”

PGA Life Member Don DeAngelis ran away with the Super Senior Division with rounds of 69-76—145, to finish with a nine-stroke margin at 1-over-par. Marjorie Jones, Shore Club, finished second in the division. DeAngelis had shot his age (69) in the opening round.

The 2021 Philadelphia Senior PGA Professional Championship is presented by Cadillac, and is supported by Golf Channel, John Deere, Ohana Farm LLC, and the PGA Tour. The Philadelphia PGA Section and its PGA Professionals thank Huntsville G.C., its membership, management, and staff, as well as our partners, as the event would not have been possible without their support.

PGA Life Member Don DeAngelis shot his age, 69, to build a commanding lead in the Super Senior Division at 3-under-par. Marjorie Jones, Shore Club, finished at 4-over-par, while James MacFarlane, Camden County Golf Academy is at 9-over-par headed into the final round.

The 2021 Philadelphia Senior PGA Professional Championship is presented by Cadillac, and is supported by Golf Channel, John Deere, Ohana Farm LLC, and the PGA Tour. The Philadelphia PGA Section and its PGA Professionals thank Huntsville G.C., its membership, management, and staff, as well as our partners, as the event would not have been possible without their support.

Price was the first of the trio in the clubhouse at 4-under-par, tapping in for par on No. 18 for a 68. Oakley soon followed on No. 9 (his 18th hole), but it was Brett Walker who delivered last-minute heroics at his home club. Walker was at 3-under-par on the 18th, and managed to hole a long birdie putt of his own to join the playoff.

On the first hole of sudden death, No. 18, Price hit to about 25 feet to set up his birdie, while Oakley and Walker both hit to within 15 feet, with significantly easier undulations to navigate. Price proceeded to make his long left-to-right breaking putt with authority, causing the crowd to erupt. Oakley and Walker’s birdie putts both missed.

“This was the most fun I could have on a golf course,” said Price after the playoff. “Making that putt in the playoff was incredible.”

Parks went on to thank the event’s title partner, The Haverford Trust Company, their founder and director George Connell, Sunnybrook Golf Club and its membership, the membership and his students at the C.C. of York, and his fiancé.

Steve Wetherill, a Sunnybrook G.C. club champion, finished with Low Amateur honors after turning in a 3-under-par 69 to top Hank Smith by three strokes. Amateur Francis Vaughn made a hole-in-one on the 185-yard eighth hole.

The 24th Haverford Philadelphia PGA Classic’s title partner is The Haverford Trust Company, and is supported by Precise Yardage Books. The event is also a Rolex Philadelphia PGA Player of the Year bonus points event. The Philadelphia PGA Section and its PGA Professionals thank Sunnybrook G.C., its membership, management, and staff, as well as our partners, as the event would not have been possible without their support.

About The Haverford Trust Company
The Haverford Trust Company was founded in 1979 on Philadelphia’s landmark Rittenhouse Square. Since our founding, one thing has remained unchanged…our commitment to quality. Haverford has prospered for 40 years in a finance industry dominated by giants through our passion and adaptability. With 110+ employees and $13.4 billion* in assets, our size is our advantage. We focus on the essentials: the Quality Investing philosophy that provides our clients with the right mix of stability and growth across the market cycle. For more information, visit HaverfordQuality.com.

*Including assets under management or consultation for The Haverford Trust Company and Haverford Financial Services as of 7/31/2021.

Walker turned in a winning total of 8-under-par, 67-66—133, to win his first Philadelphia PGA Professional Championship, following the cancellation of the final round due to severe weather stemming from remnants of Hurricane Ida. Zac Oakley of Bidermann G.C. in Wilmington, Del., was runner-up at 6-under-par. They are joined by Billy Stewart of Union League Liberty Hill in Lafayette Hill, Pa.; Ashley Grier of Overbrook G.C. in Villanova, Pa.; Rusty Harbold of Philadelphia Cricket Club in Flourtown, Pa.; Terry Hertzog of Merion G.C. in Ardmore, Pa.; Dave McNabb of Applebrook G.C. in Malvern, Pa.; Trevor Bensel of Overbrook G.C.; George Forster; Hugo Mazzalupi of Patriots Glen National G.C. in Elkton, Md.; Steve Sanderson of Pine Valley (N.J.) G.C.; and Parks Price of C.C. of York in York, Pa. Forster, Mazzalupi, Sanderson, and Price clinched their trips to Texas in a six players-for-four spots playoff Thursday at Aronimink.

Mike Furey of Saucon Valley C.C. in Bethlehem, Pa., and Scott Reilly of Philadelphia C.C. in Gladwyne, Pa., are first and second alternates, while Michael Little and Mark Sheftic, both of Lookaway G.C. in Buckingham, Pa., are third and fourth alternates. Dave Pagett of Whitemarsh Valley C.C. in Lafayette Hill, Pa., is fifth alternate. Walker had previously qualified for the 2022 PGA Professional Championship via play in this year’s PGA Professional Championship.

“My goal for Aronimink was just to break par,” said Walker. “The low score on the course the day before was even par, so I figured being under par would give me a leg up on the rest of the field.”

Walker said he hopes to use the experience he picked up this week in the 55th PGA Professional Championship in April.

“Aronimink can play difficult and has hosted major championships and PGA Tour events, and I feel like my game was set up pretty well for it, Walker continued. “I am definitely going to take that to other tournaments and courses.”

Walker went on to thank Sunnybrook G.C., its membership, and PGA Professionals Greg Wingate and Brad Sanders for the support, as well as his parents, Bob and Betty, his girlfriend Sarah and her parents, who were all in attendance as spectators.

Walker also made his major championship debut earlier this year in the 103rd PGA Championship at Kiawah Island (S.C.) Golf Resort’s Ocean Course. In addition to having his name engraved on the William B. Packer Trophy, Walker earned $9,000 for his win, coming from the $72,000 purse.