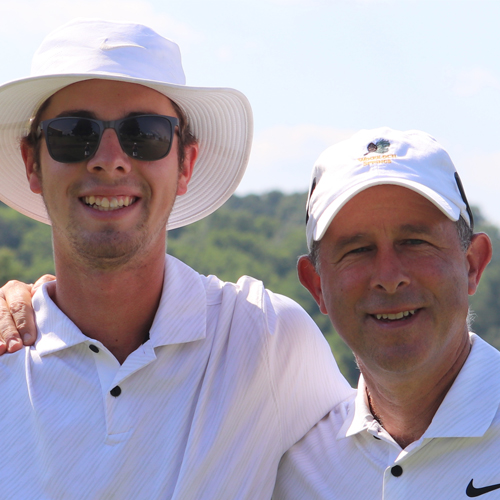 In the Gross Division, C.C. of Woodloch Springs’ John Pillar, PGA, and his son Alex took top honors with their team score of 7-under-par 63, a round that featured seven gross birdies. The Gardners from Bluestone C.C. finished one stroke behind, followed by the Steinmetz, and Swartz teams at 5-under-par.

Lower Gwynedd Township, Pa. (June 30, 2022) — The Philadelphia PGA Section is happy to announce the newest addition to its tournament calendar, the DeAngelis Pro-Am. The event, scheduled for Thursday, August 4 at the 1912 Club in Plymouth Meeting, Pa., will honor the late Don DeAngels, PGA, who passed in January 2022.

DeAngelis was elected to PGA Membership in 1978, and played the game with immense talent, winning the 1985 Pennsylvania Open and playing in the 1978 U.S. Open at Cherry Hills Country Club in Denver, Colo., and winning a Section tournament in six straight decades. His most recent win was in September 2021, when he won the 2021 Philadelphia Senior PGA Professional Championship’s Super Senior Division, and also shot his age, a 69.

Following DeAngelis’ passing, his family approached the Section in hopes to create an annual event to pay tribute to Don and his career. The event will feature 30 teams comprised of one PGA Professional and three amateurs competing in a two best balls of team format in both Net and Gross divisions. Tee times will run from 8:00 a.m. to 1:00 p.m ET. Lunch will also be provided.

PGA Professionals may register their teams for $500 per team. To register, click here.

The Philadelphia PGA Junior Tour’s FUNdamental Tour is now open to all age divisions so that at no matter what age, people can grow with their golf game. This new tour is aimed at beginner golfers who are not quite at the level to compete on our junior tour and offers shorter yardages and the opportunity to have a caddie. The goal is to provide the tools necessary to aid our beginner golfers with the improvement of their games and the building of their confidence. The emphasis is on having fun and encouraging our golfers to grow their love for the game.

Coe and Shattuck both turned in 2-under-par 68s to tie PGA Member Eric Kennedy of Overbrook Golf Club in Villanova, Pa., who played in the first pairing off No. 1, and set the early clubhouse lead. Kennedy was unable to compete in the playoff, and as a result, finished the event tied for second place with Shattuck.

Coe made an impressive nine birdies during her round, including a stretch of four in a row, but also made three bogeys and two doubles.

“I probably had one of the best putting rounds of my life today,” said Coe of her round, who was also struggling with a laceration on her thumb. “I hit it well, but had a few missed shots because of my thumb, but my putting saved me.”

Coe and Shattuck both parred the first playoff hole, the par-4 ninth, with two world-class up-and-downs from left of the green; Coe played from long-left near the golf car path, while Shattuck played from the left greenside bunker. Coe drained her approximate 20-foot par putt, followed by Shattuck’s six-foot make. Coe made a par on the par-5 10th hole to win.

There was a three-way tie for first in the Senior Division, with Eddie Perrino, Hugo Mazzalupi, and Rich Steinmetz, each finishing at 1-under-par. John Pillar, C.C. at Woodloch Springs; and George Forster, PGA, finished tied for fourth at even-par.

The 2022 Conestoga Classic is supported by Jani-King, and Ohana Farm LLC, Silvercrest Asset Management Group, and the PGA Tour. The Philadelphia PGA Section and its PGA Professionals thank our host, Conestoga Country Club, its members, management, host PGA Professionals, and staff, as well as our partners, as the event would not have been possible without their support.

The next Philadelphia PGA Rolex / The Haverford Trust Company Player of the Year tournament and Silvercrest Cup qualifier on the schedule is the William Hyndman III Memorial Classic on Tuesday, July 5, at Huntingdon Valley Country Club.

The 2022 Philadelphia PGA Professional Championship Presented by Cadillac is also supported by Golf Channel and Jani-King.

Entering the final round, Steinmetz held a one stroke lead over Kelly and Greg Farrow of Deerwood Country Club in Mount Holly, N.J., but had to wait an hour and forty minutes longer to tee off No. 1, as severe weather delayed the competition. Once he began his round, he came out firing, making birdie on Nos. 1 and 3.

The top of leaderboard, however, began to tighten, as Hertzog started to make birdies of his own, ultimately finishing the event at 4-under-par. Kelly had a bit of an up and down round which featured two bogeys, a double bogey, and six birdies, including four in a row on Nos. 13-16, to finish with rounds of 70-70–140, tying Hertzog.

Steinmetz had made 10-straight pars until he reached No. 17, where he hit it close to the hole on his approach, and made the birdie putt on the 365-yard par-4.

“I hit it really well,” Steinmetz said of his final round. “I put myself in good spots off the tee, which made it easy, tee-to-green. I hit it close a lot, which helped; it was tough to read these greens. They’re really tricky.”

Steinmetz went on to thank the folks at his home facility, Spring Ford Country Club: the members, and staff, for their support and allowing him to get out and play in competitive events like this championship. He also thanked host club Medford Village Country Club.

His win was even more special, considering it was his first start in a senior championship, as he turned 50 years old in December 2021.

Read the Latest Edition of ‘1921,’ the Official e-Pub of the Philadelphia PGA Section

Matt FreyApril 22, 2022Comments Off on Read the Latest Edition of ‘1921,’ the Official e-Pub of the Philadelphia PGA SectionFeatured, PPGA